A product of tradition and craftsmanship
-Value of Marugame Uchiwa fans-

History and culture that has continued for over 400 years, since the Edo period

It is said that the chief priest of Konpira Shrine devised the "Shibu Uchiwa,” a fan coated with fermented persimmon tannin, bearing an official seal of the shrine in 1633. Later, they became prevalent nationwide as a souvenir of the Konpira Shrine pilgrimage.
Around 1887, the Marugame Uchiwa were exported to China and the United States. The increase in export shaped the current manufacturing practice that consists of specialized production processes including cutting out frames from bamboo, mounting leaves on the frames and painting the leaves.

Kagawa Prefecture became Japan's number one producer of bamboo fans due to the materials, including woodblocks, knives, paper, glue, and bamboo, being located and sourced in Marugame City.

How to find a high quality Uchiwa fan

Marugame Uchiwa fans are handmade by local craftsmen. In comparison to the mass-produced fans, some of the authentic handwork details are easy to identify. 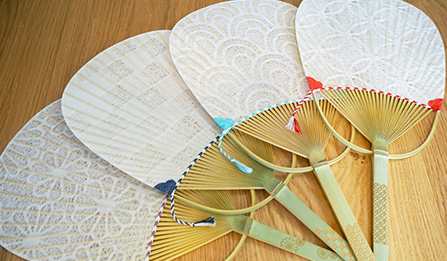